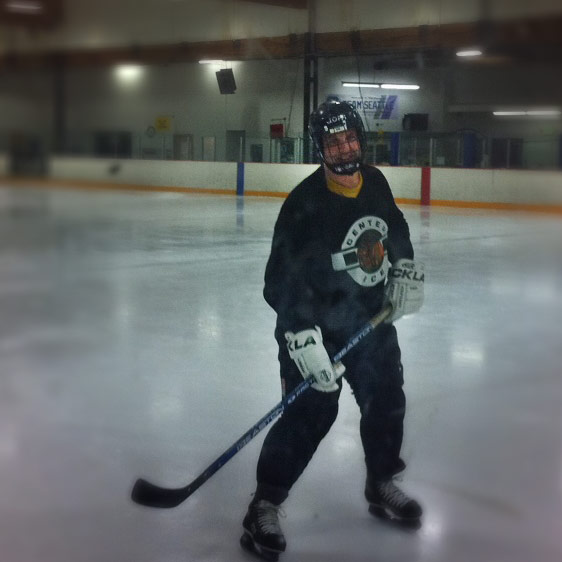 Teaching your children to snowboard should be a fun and rewarding experience, or so Nick Nagel thought until he found himself planted face down in a snow bank with a shoulder injury. However, it would be a year later with many league hockey games in the record books, as well as elbow surgery, before Nagel would have his shoulder repaired by Dr. Steven C. Chudik, orthopaedic surgeon and sports medicine physician with the Steven Chudik Shoulder and Knee Injury Clinic in Westmont, Illinois.

“After my snowboarding fall my shoulder hurt from time to time, but it really didn’t bother me very much,” explained Nagel. “I worked in an office and the hockey league had a no check rule, so I rarely had any pain,” he said.

With only an occasional twinge in his shoulder, Nagel continued his daily activities for six months—including working out and lifting weights. “In August 2010, I was in the gym curling weights with my arms resting on a bench—not a lot of weight—and I felt, saw and heard the biceps tendon in my left elbow detach,” Nagel explained. “Immediately I experienced a very sharp and intense pain, but then it subsided. So I went home, showered and drove to work, but stopped at a convenient care center on my way home.” According to Nagel, the convenient care physician assistant (PA) diagnosed the problem as a ruptured bicep tendon and instructed him to see an orthopaedic physician because he needed surgery.

“My son saw an orthopedist at Hinsdale Orthopaedics when he broke his thumb, so I called and made an appointment,” Nagel said. “I saw a doctor who didn’t perform this type of surgery, so he referred me to Dr. Chudik who did a distal bicep surgical repair.”

During his last follow-up appointment, Dr. Chudik asked Nagel about his elbow. “I told him my elbow was great, good as new, but my shoulder was really starting to bother me. Dr. Chudik prescribed physical therapy as a first step,” Nagel explained. Because of work travel commitments, Nagel was not able to fit physical therapy into his schedule. He also took a new job requiring him to relocate from Downers Grove, Ill., to Seattle.

“By that point I was in a lot of pain and I wanted to find out what was going on before I moved, so I scheduled another appointment with Dr. Chudik,” Nagel said. “An MRI showed a torn rotator cuff in my left shoulder that required surgery to repair the damage. But, the question was when because of my move,” he explained.

Fortunately for Nagel, his move date was delayed which gave him time for Dr. Chudik to perform arthroscopic rotator cuff repair surgery before he relocated. “Dr. Chudik referred me to an orthopaedic physician in Seattle to take over my post surgery care and rehabilitation. The new surgeon was amazed at my recovery and told me that most patients aren’t this far along so soon after rotator repair surgery,” Nagel said. “I guess I recover well. Within days after my surgery, I had little pain and didn’t need to take anything except at night. Even my physical therapist was impressed with my recovery. I had most of the range of motion in my shoulder just six weeks after my surgery,” he added.

As for his plans about playing ice hockey? According to Nagel, he resumed participation in a men’s league even scoring several goals, but he probably will forego snowboarding.